The Agriculture Bill could be amended in the House of Lords to include further guarantees designed to stop imports watering down standards.

Read more about it here.

The Conservative Party was elected on a manifesto which committed Mr Johnson’s Government to “not compromise” on the UK’s “high” environmental protection, animal welfare and food standards in “all our trade negotiations”.

But peers continued to voice concerns about the prospect of cheap imports and pressed for new guarantees to be included in law via the Agriculture Bill, which sets out a new policy as the UK quits the EU-wide Common Agricultural Policy.

Lord Addington said the Government would be bound to its commitment on standards if it was written into Bill. “If we don’t get something on the face of this Bill… we have no other way of at least making the Government stand up and say ‘yes, we’re changing it because…’ and I think that’s what this is about.

“I hope the minister is taking this on board because… ping and pong backhand forehand and the odd smash might be involved on this one. We can actually get involved in long discussion when the House is asking Government to honour its own manifesto. I wouldn’t have thought any government wants that.”

Conservative Lord Cormack said his party’s 2019 election manifesto made a “total commitment” to enhance rather than diminish UK food standards, adding: “If this Bill does not create a situation where that can happen then it is indeed… not fit for purpose.”

Lord Cormack predicted there could be a lengthy report stage for the Bill and “quite a lot of contact” with the Commons as a result of any amendments made by peers if the Government did not make the desired changes.

Labour argued legislation must include a requirement for agricultural and food imports to meet domestic standards. Shadow environment minister Lord Grantchester said: “The simplest way to decide this matter is by enshrining the UK’s position here in law.”

Save British Farming is campaigning to create awareness amongst the public about the lowering of food standards and to use public pressure on MPs to support an amendment in which the current standards are kept.

On an overcast day in early July, drivers in central London found themselves in a situation that’s familiar to anyone used to rural living: getting stuck behind a slow-moving tractor.  Except in this case, it was many tractors, plus a cavalcade of other vehicles including a group of animal rights activists dressed as fruit and vegetables.

How did this come about?  Volunteer activists, including Celebrity Masterchef-winner Emma Kennedy, concerned about British food standards and the impact of cheap food imports on British farming and food production, invited selected farmers to drive their tractors and cars on a socially-distanced drive-slow demonstration around Parliament Square. 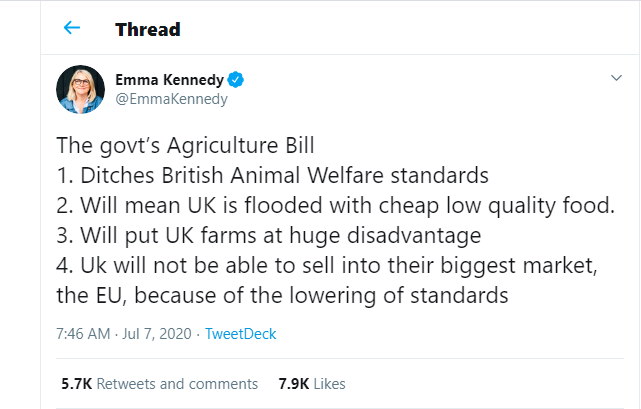 So, on Wednesday 8th July 2020, the tractorcade gathered at New Covent Garden Market, Vauxhall and set off just after 1pm. They slowly criss-crossed Vauxhall, Lambeth and Westminster Bridges before circling up to Trafalgar Square and back down Whitehall into Parliament Square for a finale of three loops in front of Palace of Westminster where a large crowd and a veritable posse of press photographers had gathered to cheer this unusual sight on.

Save British Farming organised the demo to launch our summer campaign.  We believe the Government is betraying voters and the British public by reneging on its manifesto pledge to uphold our world beating British food and animal welfare standards. They want to pass an Agriculture Bill that will ditch UK animal welfare and environmental standards for farm imports, flood the market with low-quality food and destroy Britain’s world-class farming industry.

We must save our farms and our British food industry.  We must protect and promote our high-standards of food safety and sustainability – not allow sub-standard imports that will threaten the nation’s health, the survival of family farms countrywide and rural economies.

Wiltshire farmer and event organiser, Liz Webster, commented, “The Agriculture Bill is disastrous for British farming; it threatens the safety of our food and diminishes our food security.  Imports from countries that are allowed to produce food with lower standards mean that British farmers won’t be able to compete and this will decimate our industry – just as imported coal put British coal out of business in the 1980s.

“Offshoring our food production half way across the world will lead to further destruction of the Amazon rainforest to make way for grazing land.  It will also add more food miles.  Both are a backwards and dangerous step. We need to ensure our food security through sustainable food production, so when disasters such as Covid or a climate event strike, we can continue to feed the nation.

“We were delighted this demo to launch our campaign got off to such a great start.  Please sign up here to follow our campaign and get involved to fight to maintain our world beating food and animal welfare standards.”

Darren Jones, Member of Parliament Bristol North West explained, “We need to see an Agriculture Bill that protects our legal guarantees on animal welfare and environmental standards in future trade talks. Ethical, sustainable and competitive farming is something that farmers, consumers and animal rights activists all agree on. I hope that the Government listens to this shared call on Wednesday and places food security, animal welfare and net-zero targets as central to our agricultural strategy.”

This demo was the inaugural event of Save British Farming.  A summer of activities is planned to highlight how together we can save Britain from the horrors of chlorinated chicken and hormone-fuelled beef and regressive/cruel animal welfare practices.  Save British Farming is launching a